What's the procedure of transferring the Working groups in Bitrix24?

Many of the Bitrix24 users create and use the Working groups. Unlike Projects, the groups are capable of interacting with extranet users; it's also possible to create a group to tackle any work related issues, as well as organize leisure activity or simply discuss common hobbies. The users added to a group have access to the files stored on a specifically allocated space on Bitrix.24 Disc.

Why, then, a group transfer may be required?

During the last 15 years, our team has met a wide variety of customers' requests that also included processing transfers. Basically, can be identified two typical situations in which Working groups might need to be transferred from one location to another:

In the first scenario, it is impossible to perform the transfer using a common method. There should be no issues when performing the on-premise migration: the cloud backup would contain the Working groups, although some of the materials might still require a manual transfer. Our professionals found a solution we are ready to share with you.How did we accomplish that?

To transfer the data, the Avivi company created a special script functioning via API which completes the process independently. This solution is the ideal option if you decide to transfer and it's a priority for you to fully preserve the integrity of the groups, their connections and history.

Here is an example of how this works.  On the Market page, select "For Developers", then "Other" and create an Incoming webhook.

Then, we would need to define the access rights and save a part of the URL, as we will need it for a further request sending procedure.

Important note! It's critical to take into consideration, that several requests will occur simultaneously, which will lead to a substantial load for the system. Hence, we use the batch method which allows sending several requests simultaneously and in a sequence. This is a very significant point in a thorough transfer process, which describes the proficiency level of Bitrix24 developers.

So, we create a request that looks as follows: 1 – is the URL we saved earlier, 2 – is the name of this process. 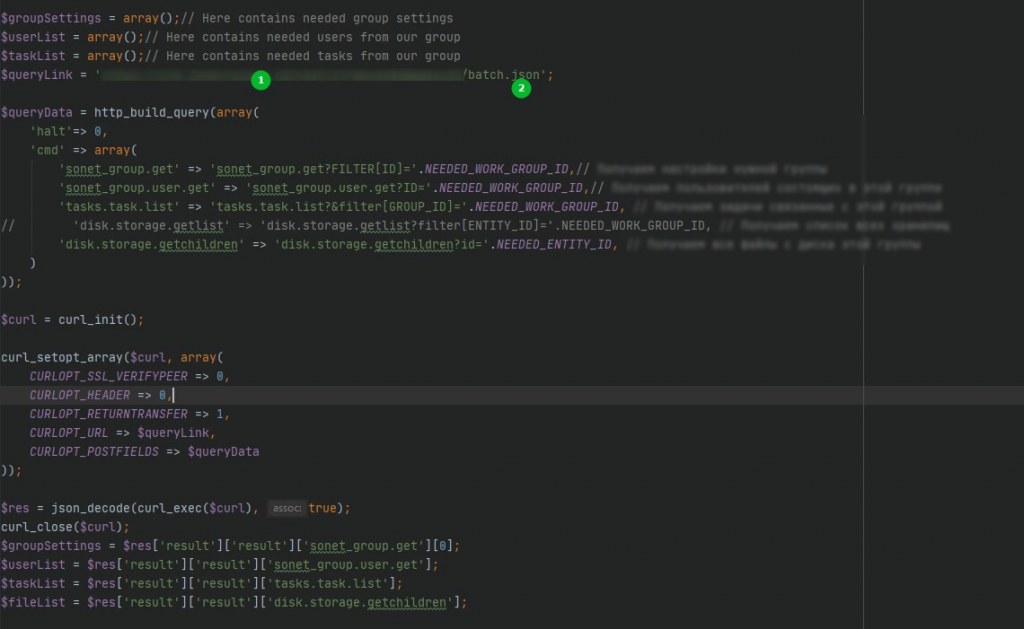 The API methods through which we receive specific data are listed as follows:

5 — receiving the files from the working group disc.

Then we save this data for its further processing. If there are files stored on the disc of a group, an additional upload is required.

Now it's time to import.

We create a similar webhook in Bitrix24 as a place for the data to be imported into with these stages.

So, when everything is ready, the script will automatically transfer the Working groups along with all their materials.

Issues may arise where you don't expect them, even if everything has been done according to the instruction and verified by logic. It is possible that a request makes a mistake. The most common reason is the incorrect transfer of the parameters in the filter, and when this happens, it's advised to review the Portal documentation. Also, there might be some difficulties connected with an absence of the respective rights when configuring a webhook. In addition, we are aware that the script is quite complex to be launched through a browser. Thus, we would definitely require access to your SSH to transfer your Working groups.

We've looked at the basic points and potential issues for the Working groups transfer into Bitrix24. On practice, other issues or conditions may arise in each particular case. Thus, the most efficient solution is to address Avivi's specialists for assistance. Our team has performed the transfer on multiple occasions and is able to carry out this process in a timely manner and to the highest standards.

Do you love social media? Moreover, would you like to use social networking to work online directly for your company? Bitrix24 will give you this opportunity and offer a set of different tools to make your workflow as efficient as possible. Learn more about the features of the software and the nice features of working in a social network in the new article of our blog.

Both systems capabilities include uniting the team of employees in one corporate space, providing an efficient and accessible communication between employees. There are a lot of "but", though. You can learn about the advantages of Bitrix24 over its opponent in this article.

If you are serious about looking for the best CRM-system, you could not hear about the North American HubSpot product. It’s older than Bitrix24 for almost 6 years, this small platform feels great on the Western B2B market, collecting high ratings and feedback. But what's the feature of HubSpot and will it resist against Bitrix24? Let's find out.