Zoho company, whose name is present in every created product, has been on the market since 1996 and began its journey from India. The name itself was born from the English abbreviation for the words "small office, home office (SOHO)", which emphasizes the direction of the company. This is the creation of office cloud (SaaS) applications for business development and collaboration, one of which is the well-known Zoho CRM. Thus, the main competitors of our current contender for the championship are more Microsoft and Google than Bitrix24, Salesforce or HubSpot, who position themselves as developers of CRM-systems. 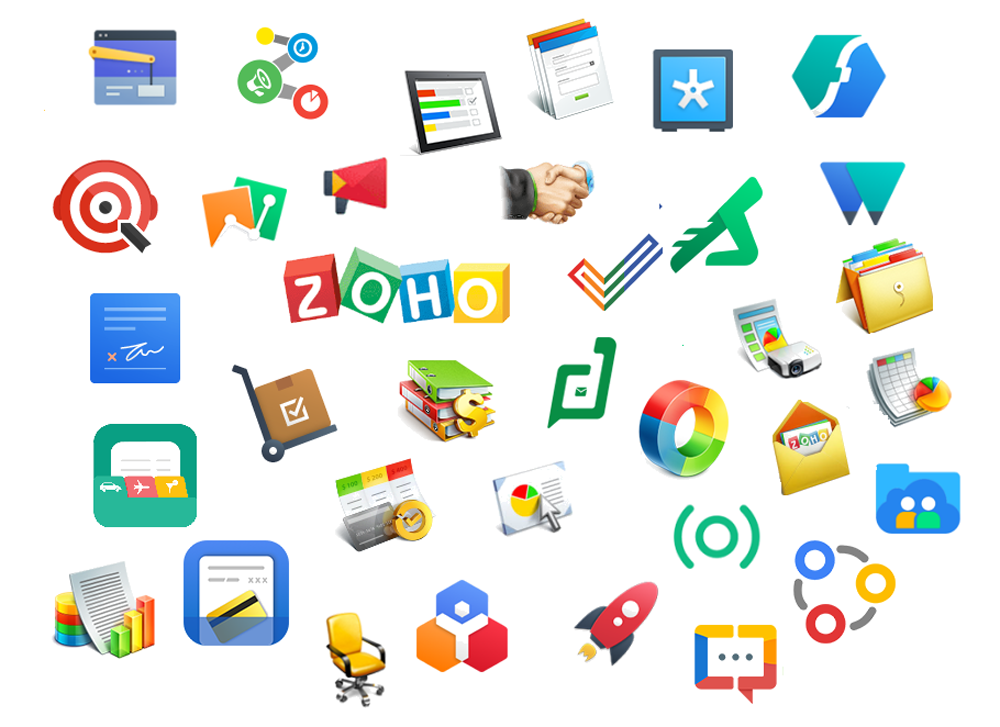 Maybe that's why Zoho has created a pretty good, but in some respects not the best, product, with more than 300,000 users at the moment, with Bitrix24 worldwide crossing the 5 million mark in April 2019. In any case, today we will focus solely on CRM and, since there are so many such comparisons on the Internet, we will only talk about serious and important differences.

The cloud Bitrix24 has everything quite clear with licenses, as with many other SaaS services: the user chooses a tariff plan and concludes a user license for a certain period of time. You can pay even on a monthly basis, but not all partners of Bitrix24 are allowed to sell such licenses under the terms of a collaboration with a multinational corporation. Usually, the partner starts with three months, then six months, a year and two. Very often different loyalty programs are working: the more time a customer chooses, the greater discount on the total amount of payment they receive (up to 40%!). Partners also have the right to provide their own bonuses to clients: this is not a discount on licenses, but something extra and enjoyable. For example, Avivi company is ready to provide a bonus in the form of free hours of work for implementation or refinement of Bitrix24; the number of such hours depends on the cost of the license purchased.

Zoho's policy is different: to use CRM or another service, you must become a user of the system itself. Licensing occurs directly by the number of users, that is 1 user = 1 license. Authorization comes with a login and password, and allows you one time to run an unlimited number of sessions on different devices. CRM records the number of licenses that cannot exceed its number of users; to access new employees, you either need to deactivate your old employees or to purchase new licenses. And it is possible to do it either for 1 month, or at once for 1 year.

Licensing differences affect greatly the pricing dimensions of both products.

Firstly, let’s talk about free things. Both systems offer to try their "cut" but workable product without money. Bitrix24 lets you to use the absolutely free version for at least 12 people forever; 14 days are allotted for demoing of all paid tariffs (including on-premise versions). Zoho has a trial period of one day (15 days) but the free rate is limited to 3 users only! It's hard to imagine an enterprise where only three people use the customer interaction system (one of whom is an administrator, but more on that later). If you increase the number of users to 4, the benefit of the previous three will disappear immediately and the minimum tariff will now be $ 12 (Standard rate) x 4 users = $ 48. 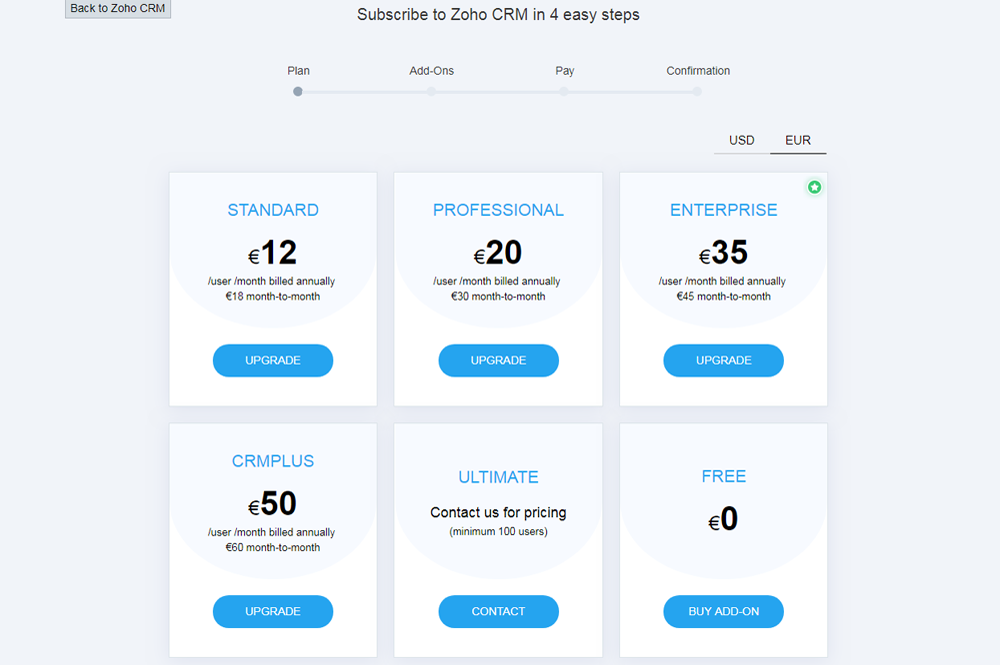 Minimum cloud Bitrix24 (CRM +) per month will cost $ 69. But for 6 users. The restatement will show that it will come out at $ 11.5 per user, which would seem to be almost equal to the price policy, but there is one "but". If you can pay Bitrix24 in advance for virtually any amount of time (within two years), then with Zoho you will either have to pay you a monthly bill for each user, or immediately prepare the amount a year in advance. The first method is quite time-consuming and quickly becomes boring, and the second will be very tangible even if you choose the cheapest tariff plan ($ 48 x 12 = $ 576). More flexible Bitrix24 billing and license agreements for the same money will allow you to pay for a cloud for 50 people of the most popular Standard tariff for half a year, which is more like a really effective solution for small and medium businesses.

Another important feature of Zoho that few pay attention to is the role of users. There are only two of them: user and administrator, with only one manager. This is closely monitored by the system and no one else can remove administrative rights. On the one hand, this is good: only one person has full access to CRM, its configuration and control of other users. On the other hand, this can be a big problem: the employee flew on vacation or became ill - the system was left without an administrator.

Bitrix24 administrators can have an unlimited number of people. This does not mean that everyone needs to be given these rights, but it gives them more opportunities for employees as well as developers or integrators to improve your system.

We move from humans to the software plane, and it's worth paying attention to the API. It is a tool for integrating one software with another. It is open to both systems and documentation is available in different languages. In Zoho, however, the list of translations is five times smaller same as the localizations in different languages of the world, but this is not the case now. The API issue is important to everyone because every business is unique and requires individual solutions in connection with other services. Both Bitrix24 and Zoho have some API limits.

Zoho provides different restrictions on data that are downloaded or unloaded under different tariff plans. For example, in the popular Enterprise ($ 35 per user per month) for medium and large businesses, the minimum number of requests per day (24 hours) will be 4,000 per organization. The top bar is at the level of 25,000 requests per organization or 500 requests. per user. Simple calculations can determine that the query limit can be rested on the presence of 50 employees: 25 000/500 = 50. This is very difficult, but it is possible, and then the API will become temporarily inaccessible, which may affect the business processes of the entire company. And, of course, we took a serious tariff, while the lower query limits are also lower.

The Bitrix24 API limit comes to a simple condition: a maximum of 2 requests per second, regardless of the tariff. The restriction does not take effect immediately, but after 100 consecutive requests that exceed this limit. It is estimated that in the same 24 hours Bitrix24 can be made (60 x 60 x 24) / 2 = 43 200 requests. This is, firstly, more, and secondly, nothing but time is not limited.

Having an API allows you to integrate both CRMs with third-party applications, but much is already integrated and ready to use. Instead of many words, we just give a screenshot of a set of ready integrations: 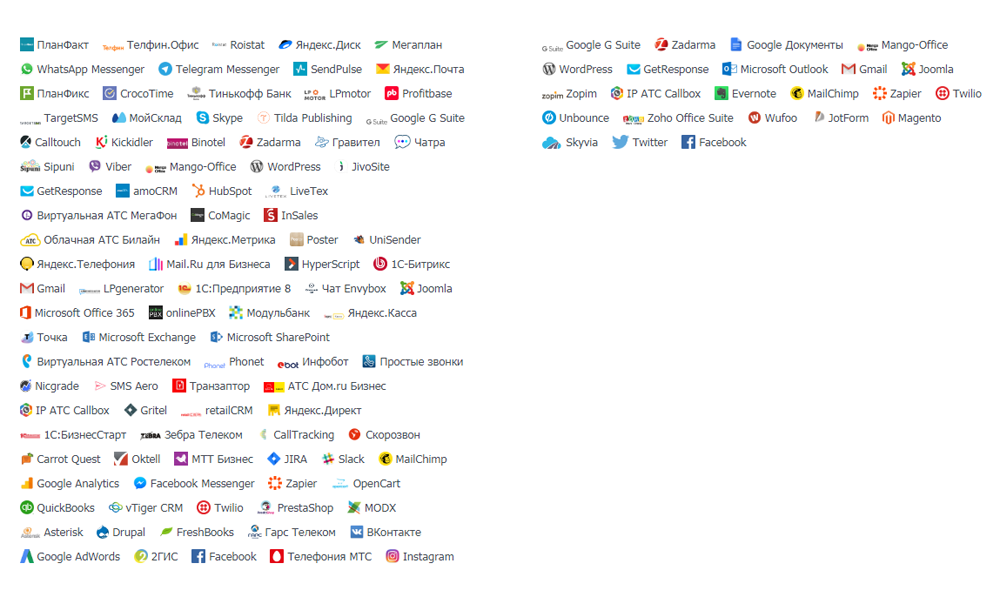 We have found the most controversial and important differences between the two contenders for victory in this article, but we leave the choice to the reader. Unfortunately, to speak about many things are useful in functionality and capabilities is incorrectly, as it simply is not present in one or the other CRM. For example, this is a huge block of teamwork and personal efficiency, which is in Bitrix24 and not in Zoho or vice versa - functionality of management of leads. Other Zoho services for office work also deserve special attention, but this is no longer relevant to the CRM system theme. It is also a pity that the local version is only available in Bitrix24, it would be interesting. But taking into account the above, it is nice to note that Bitrick24's victory is deserved by the advantages of this system, not by the disadvantages of competitor Zoho.

next article
Similar articles
How does AI help business in Bitrix24?

Bitrix24 has a variety of business tools. One of them functions by means of the AI, and that is AI24-scoring. Let's find out what it is capable of and how it can be applied in your business activities.

We talk a lot about the custom integration of Bitrix24 with other programs. But it is not always advisable to write new code to combine your system with another service or even device. At the moment, there are already solutions that allow direct integration. One of them is Zapier. We have repeatedly offered clients to use it, because it saves budgets. In this article, we talk about the features of such integrations.

It often happens that the clients do not have a clear idea why, for realization of their demands and requests, they have to switch from a cloud version of a product to a self-hosted one.