Today, there is a wide choice of ERP (Enterprise Resource Planning System) in the world. Bitrix24 is a successful combination of ERP and CRM, but it is quite suitable for use in only one particular direction.

The North American product of the eponymous company Wrike is positioned by its creators exclusively as an online ERP system. She is 6 years older than Bitrix24 and made her debut in 2006 at the Le Web 3 exhibition in Paris, where she was immediately awarded a prize in the B2B category. Today, Wrike is used by more than 20K organizations of various sizes in 140 countries around the world.

Over its relatively long history, Wrike has significantly improved many tools, achieved zen in interface display, and won the love and respect of many users: from freelancers to multinational corporations. We had to analyze the functionality and compare it with Bitrix24 for longer than planned, but it was nice from a professional point of view: the programs turned out to have more in common than different. Although in some places the logic of the processes really differs radically. That's why we offer 5 of the most interesting similarities and differences between both products, which may influence your choice of software.

Perhaps one of the main differences. Wrike is a purely cloud service, which on the one hand is a huge advantage, on the other - can become a fatal problem. Developers are responsible for service performance and data protection, and users do not need to worry about problems, and you can log into your work account from anywhere in the world with an Internet connection. Wrike has many customizations and integrations that allow you to "tailor" the product to the tastes and needs of each employee. However, it will not work to exceed the functional limits and create custom additions on the cloud service.

There may also be problems with the legislation on the protection of personal data. Wrike will not be able to store important work documents, which, according to the Law, must be located on servers inside the country.

The presence of the editor's box in Bitrix24 gives an undeniable advantage in these matters. However, it places more responsibilities regarding the organization and maintenance of the server's performance on its owners. Also, the box practically frees the hands in terms of custom modifications and expanding the functionality, changing the interface, etc.

Compared to other reviews, in this case it is nice to state: both products have a full arsenal of applications: a web application for the browser, mobile and desktop applications for all popular operating systems (Bitrix24 for Mac even has two desktop options).

You can talk about work in the browser for a long time, but there are no special differences here. In both cases, the user decides everything necessary in the mode of a single window; there is the possibility of fine-tuning the interface exclusively for yourself. In Bitrix24, the functionality seems to be much larger by default: it really is, but for ease of use, the left menu of the interface can and should be configured individually. Wrike has the opposite: the first impression is that there will be not enough functions. But it is deceptive, and everything you need can be found inside the interface in an intuitively understandable way. Wrike also allows you to use various widgets to quickly display important information and go to the necessary tools. True, it is available only on commercial tariffs, while in Bitrix24 almost all functionality, although limited, is available even in the free version.

The Bitrix24 mobile application takes up 50 MB more, but also offers many more options. It is known that the Bitrix24 team makes a big bet specifically on software for gadgets and plans to make it equal to the web version in the near future. The Wrike application allows you to receive only the most important information and perform basic operations. But if you need to work full-time, you cannot do without a computer. And sometimes the mobile application openly informs the user about it.

The presence of desktop applications in both products is already pleasing: for many users, such utilities are a pleasant bonus. The only thing that confused Wrike was the lack of adaptability. When zooming in the application, horizontal scrolling appeared and part of the functionality was overlooked. Not critical, of course, but it seemed quite inconvenient, namely, desktop programs are needed for convenience.

But in team communication there is a difference, and a significant one. In both products, colleagues can work together on common tasks or edit files together. Comments to the task are also common. But in Bitrix24, separate chats are a tool not only for discussion, but also for communication. In this way, it is possible to separate personal and work dialogues, to communicate not only together, but also face to face.

Wrike does not have this option. Discussions take place directly in tasks and are visible to anyone with access rights. All comments "fall" into the news feed. In order to address the comment to someone specific in the dialogue, there is a possibility of mention (using the "@" symbol). But even such a personalized appeal will be visible to all participants of the task.

To communicate directly, Wrike suggests using third-party software, such as Slack. However, in the comments, I was pleased with the possibility to add several (unknown limit) reactions in the form of emoticons to the message.

And finally, we note that by default in Wrike, the function of notification of various events to the employee's e-mail is activated. Bitrix24 also has this, but, on the contrary, it is additionally activated. Therefore, if you start using Wrike, do not be surprised that the mailbox will quickly turn out to be clogged with various "message boxes".

As modern practice shows, any program by itself is ineffective if it cannot interact with another program. In many ways, the availability of ready-made integrations with other services determines the choice of end users. And if there are none, then they are already looking at the possibility of custom integration. Regarding Wrike and Bitrix24, we can say that both programs have described APIs, which allows programmers to complete tasks not provided for by the standard functionality of integrations.

However, at the time of writing, Bitrix24 was significantly ahead of Wrike in terms of the number of ready-made and configured integrations. Unfortunately, Wrike is good at finding a common language with only one CRM system — also the North American and ungodly expensive Salesforce. By the way, Bitrix24 is a CRM itself. 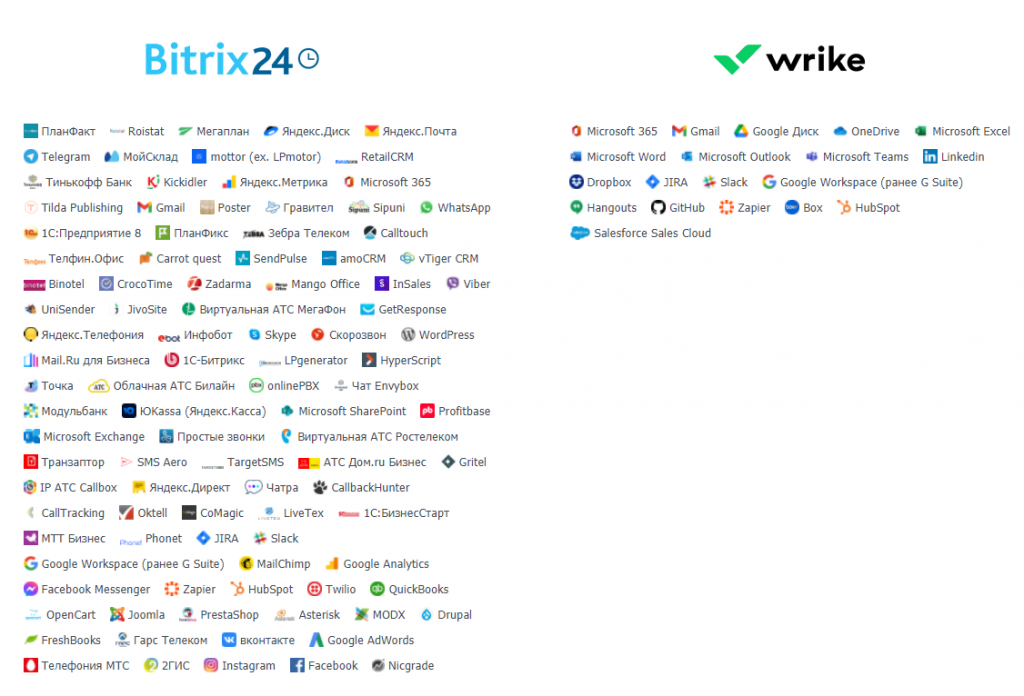 And here is another important aspect — pricing policy. Most of the negative or not entirely satisfied reviews even from satisfied users towards Wrike relate to the money issue: "expensive," they say.

To be fair, both products provide a free version. In Wrike, it's up to 5 participants, very reduced functionality and 2 GB of virtual storage. By the way, we often see marketing messages about this software, which emphasize the use of general calendars. So, you can try them only in the paid version, the trial period of which lasts 14 days. You need to pay almost $10 per user every month, if the number of team members does not exceed 15 people. And if more (but less than 200) - almost $25 per user per month on the Business tariff. Apparently, more than two hundred is required for the Enterprise tariff, the cost of which is not available.

In Bitrix24, "free" provides the opportunity to work for an unlimited number of users, 5 GB of cloud storage and more limited than cut functionality. The trial version of any commercial tariff lasts 30 days.

And in comparison of functionality and cost, a month of the most popular "Team" cloud tariff for 50 people in Bitrix24 will be equivalent to keeping only 3 Wrike users on the most popular Business tariff (~ $75).

So, we had two very good products in front of us today. Wrike left a really nice impression as an ERP. It is a perfectly adequate product for freelancers, small agencies, IT teams, marketers and the rest. At the same time, Bitrix24 doesn't have a single metric where it would be behind Wrike. But considering Bitrix24 only as an ERP system is the same as considering a dumpling separately from cheese. Therefore, we consider this product more suitable to the needs and capabilities of our customers.

What do apples, software and atomic icebreakers have in common? The answer is simple: it all needs to be sold. But it would be foolish to deny that there are no differences in the sale of these objects. Segmentation of sales areas is important, and with the development of the market, the number of these areas is increasing. If most everyone involved in sales knows about B2B and B2C, then B2G and C2C are often "dark horses". We understand the terminology and learn new areas together.

Speed solves everything: what does Bitrix24 do for business faster than anyone else?

Using Bitrix24 can speed up quite a few different processes that used to take up valuable time and fatigue employees. And the higher the speed with which your company works, the more benefits you get at the end of the reporting period. We have prepared a story about the most important aspects of work, which with Bitrix24 get almost the first cosmic speed.

Holding any event requires tremendous efforts, competent budget planning, time, team building and constant monitoring. That is why many people responsible for events after their completion immediately go on vacation, sick leave or, in the worst case, quit or simply abandon this business for a long time. But if you have Bitrix24, then the whole process of preparation can be optimized so that the creation of an event becomes fun and exciting!