Combining the game mechanics with serious and not playing processes (which, by definition, is called “gamification”) claims to be the best way to improve employees’ performance. And not without a reason: it practically does not require any special expenses, gives the HR-department the widest field for activities and imagination, unites the team and many, many things. Any psychologist will tell you how gamification has a positive effect on motivation, increases self-esteem and a sense of importance of each individual employee or the whole department. But we are not psychologists. We are IT workers implementing Bitrix24 — one of the best products for communicating with customers and managing a company. Therefore, we are happy to tell which standard tools already gamify work with Bitrix24, and which can be created at the request of the working people.

In fact, we are constantly dealing with different manifestations of gamification around us. There are various contests in social networks, for example on the best comment or achievement of a certain “likes” for the post. And there are also things not related to gadgets and the Internet at all, such as a loyalty card in a kiosk with your favorite coffee, we buy 10 cups, glue 10 stickers to the card and get the 11th cup for free. There is even the call to collect waste paper — “Collect 100 kg of waste paper — save 1 tree!” — this is a kind of game manipulation.

"Generation Y", that is, people who have been in contact with gadgets and virtual games since childhood, are much more inclined to everything where gaming overtones occur. The processes in which you need to “progress levels”, “pass missions” or cast something are already familiar for them. Given that even the first representatives of this generation are already at full working age (look at your managers department), ignoring the possibilities of gamification is simply an unacceptable waste for directors.

There is no such tool in Bitrix24, of course, but there are many similar ones. The first contact of an employee invited to the portal is very similar to a game task. I remember well my feelings when on the first day of work I clicked on a link from a letter and the task “Fill out your profile!” instantly flew to me when the manager wasn’t even there. In short, it was as in the best quest traditions. It is clear that I immediately began to perform the task, to understand the profile fields (for filling in which, too, by the way, points are awarded) and did not calm down until I completed the first task in my life in Bitrix24.

Examples of gamification can be found in other sections of the system. Personal effectiveness, which is built in the form of graphs and diagrams, allows you to control your own responsibility in an unobtrusive, but very effective form:

Some experts believe that the gamification of the working procedure has a great and bright future. Many things were used here from the very beginning of human evolution, but the effect has become noticeable with the rapid development of technology. We have reviewed the readiness of the Bitrix24 system to accept the challenge of the future and want to share Avivi's work in this direction.

The presence of an animated diagram creates certain associations for the user. And when the green “waves” fall and change color, there is an additional motivation to “pull up tails”.

It is very easy to organize a live or competitive game process using Activity stream or even regular messages. For example, we are announcing a competition for the best idea of ​​using a broken office printer forever. The rules are simple:

That's all. Employees will begin to participate in the discussion and generate a lot of ideas from the banal “Throw” to something like “Transform into a creative pot for a flowerpot”. And they themselves will choose the winner. You just have to announce him and give a prize. In addition, this practice is an excellent generator of ideas that can solve different problems.

Another effective method is Thanks. This tool can be used directly - to thank the staff for good results — and vice versa. One company struggled with employee delays, “awarding” badges in the form of a snail by non-punctual people. For five snails, they had already appointed a very real fine ... But this did not come to this: the constant involvement of employees in the process of general distribution of badges in an Activity stream increased discipline. Thus, even the standard Bitrix24 functionality allows you to come up with a ton of ways to improve your work with simple mechanics. But more complex things can become a code.

The management of our company strongly supports the efforts of employees and encourages industry leaders. As in any IT-company, our developers fix the expended time. Avivi company has created two solutions for the convenience of controlling this process at once (suitable for the cloud and the on-premise): application Time and Project Report PRO and TimeDoctor Integration. But another custom solution was written by our programmers specifically to gamify the competitions between themselves. 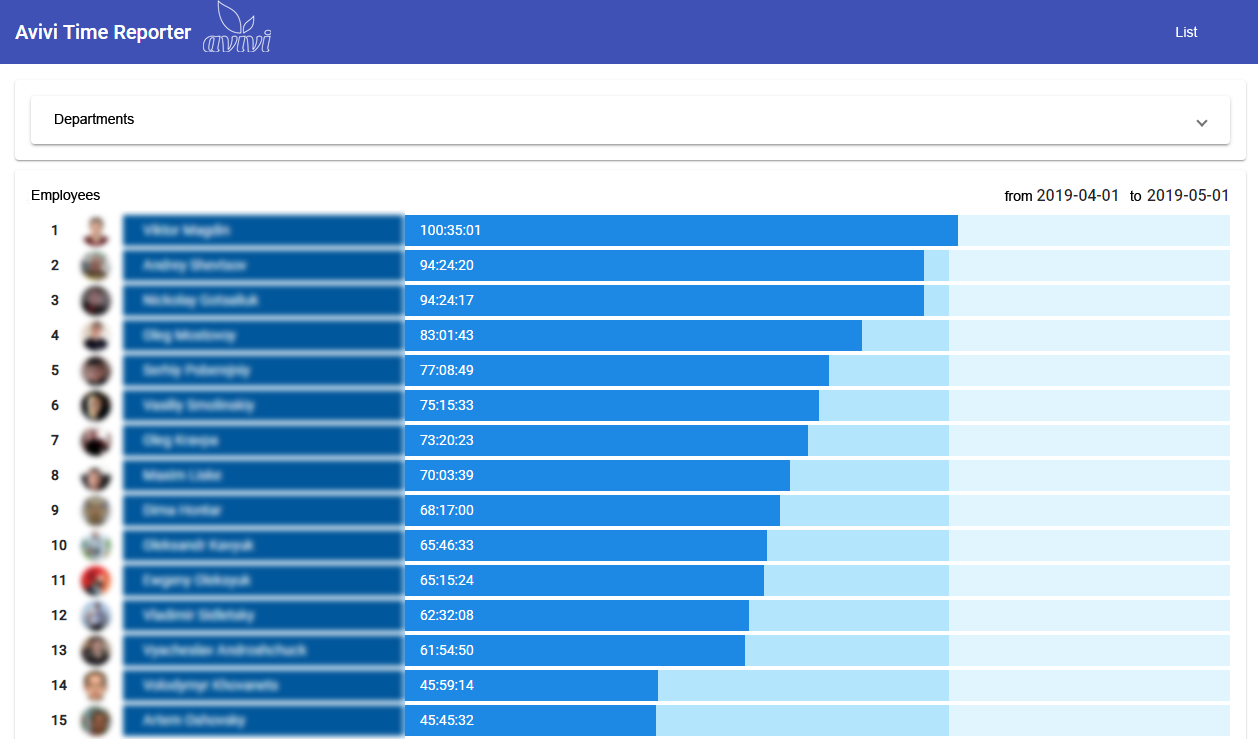 Created using Angular technology and extensive use of custom Pipes, the application displays the rating of the most productive developers.

The principle of work is very simple: for getting the time taken into account the webhooks are used. According to the methods of open API Bitrix24, the data is extracted from our CRM and displayed in the ranking order of the sequence. Only the expended time is compared — if the employee did not press the “Finish” button in the task, his current time from the moment you click “Start” will not be taken into account. However, at the end of each working day, everyone can see the real picture of the race for the monthly bonus on the monitor or from a smartphone. The application allows you to view the overall result of all employees or select individual units from the Avivi structure.

Let's face it, this integration greatly influenced the perception of team spirit and the development of healthy competition. In addition, anyone who knows the link to the application can track the race, which makes it fair. If the legislation did not prohibit, it would be great to add the totalizator :)

Development of such a workable application for your company without authorization, customization and design refinement will take from 30 hours. We will be happy to answer your questions personally.

But everything pales before the tasks from our enterprise customers who wish to remain incognito. A huge enterprise with 8,000 users of the portal Bitrix24 developed a technical task to improve the motivation of their employees, consisting of two separate tasks. Fortunately, the on-premise edition allows you to create the necessary functionality.

The first challenge was a daily quiz. With the start of a new business day, employees see a new question from the company and four possible answers in a separate block of Activity stream or mobile application. This can be text or image text. Each employee can answer only once and at 16:00 the correct answer and the name of the winner appear in the Activity stream. For an ordinary user, everything is extremely simple and fun. In the screenshot below, we chose a deliberately wrong answer number 2 (option “B”, if it’s from the administrator’s part).

From the point of view of development and the screen of the administrator of the portal Bitrix24, the mechanism is much more complicated. The Avivi team implemented a special functionality: a separate quiz menu appeared in the admin panel of the client site. Here you can plan a lot of publications in advance, but only one of them is automatically launched on one day. You also need to choose the type of choice of the winner: either the one who correctly answered first, or an arbitrary choice of one among the array of all who gave the correct answer. Response data is returned continuously, but the business process for determining the winner starts at a clearly designated time. He creates a new task for the person responsible for the quiz with a prepared result and the possibility of adjustment. Only after the approval of the administrator, the result is published in Activity stream. This is how the administrator sees our incorrect answer in the table.

Such a trick is needed, first of all, in order to be able to win more employees (let us recall, there are 8,000 of them). In addition, the previous winners for a long time are not considered by the system as applicants, even if they gave the correct answer. But we won't tell anyone about this, right?

The second task was the finalization of the functional incentives. At the request of customers, the Bitrix24 badge collection was structured and expanded. Now there are separate categories with icons that contain more sets of badges. All these elements have their own values ​​(points) and coefficient. 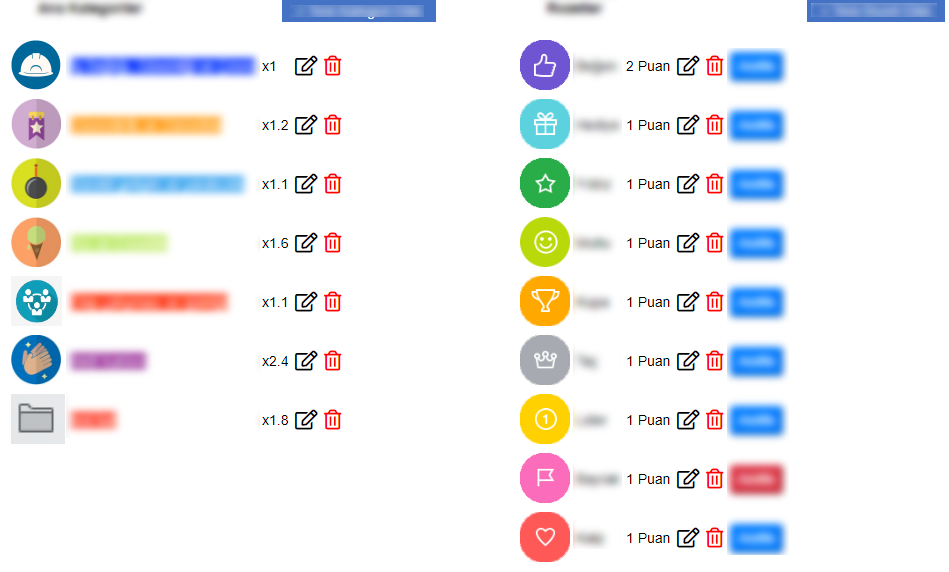 The system of this achieves works as follows: the posts of employees in Activity stream can be marked with one of the set of badges. The right to do belongs only to one person, so we consider it the director or the main HR himself. All users of the portal can see which badge is assigned and cannot be removed. Therefore, Bitrix24 will double-check again before allowing it to be assigned an icon.

In the admin panel there is a separate page on which all the points that the user receives in this way are displayed. People say that after this they have the opportunity to exchange points for some bonuses. But we, as developers, no longer know this — our business was only to accomplish the task. 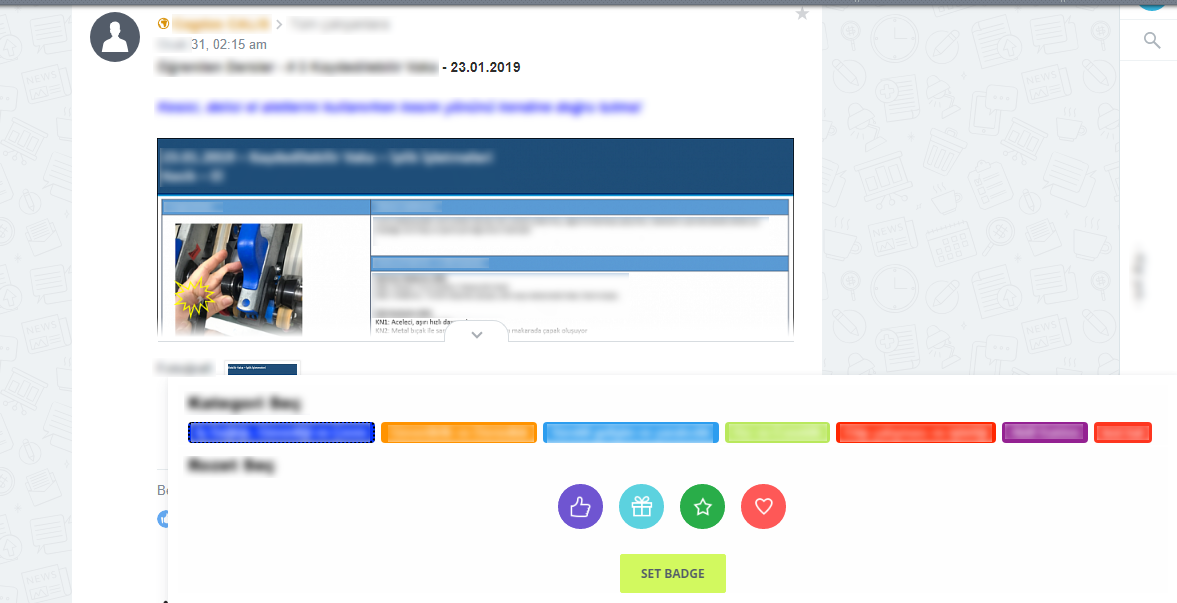 Congratulations, you’ve passed at the next level!

Gamification will more and more penetrate into many processes and the working procedure will not be an exception. Unlike any other tools, the cosplay work of any games seems to be very attractive. That is why wise leaders are already thinking about the introduction of different techniques in their companies. Avivi team convinced on personal experience that this is important and necessary. She also implemented great ideas from the enterprise customer, which proves Bitrix24’s full compliance for the development of gamification in the company.

next article
Similar articles
Why is it imperative to automate the creation of commercial offers in Bitrix24?

Bitrix24 generates many documents, but the quote is the most important one. That's why everything here should run quickly, clearly and in semi-automated mode, so that your customers get the right information as quickly as possible. In this article, we'll look in detail at an example of an effective business process with a quote that Avivi specialists created for METAL PRO BUILDINGS, a construction company from Toronto, Ontario, Canada.

Why is it mandatory to automate the creation of commercial offers in Bitrix24?

Bitrix24 generates a number of documents, but the commercial offer is the most important one. Here, everything should go smoothly, well-managed and in a semi-automatic (with the minimum human intervention) mode, so that your clients receive the correct information as soon as possible. In this article, we review the example of the efficient business process with a commercial offer that Avivi professionals created for the METAL PRO BUILDINGS construction company from Toronto, Ontario province, Canada.

Updating the display of the lists in Bitrix24

The Lists in Bitrix24 is one of the CRM system tools that plays an important role in organizing the workflow. Why are they needed and what does the update of their display offer for users — more details below.