I will say right away - this article is not for you to choose Bitrix24 instead of amoCRM, although it is in the blog of the Golden Partner Bitrix24. Avivi company's mission is: “To help earn more from the implementation of CRM Bitrix24” and it is feasible only when this system is really useful and convenient for the client. Therefore, in comparison with amoCRM, the difference between the two products should be explained, so that people's expectations coincide with reality. There are already many similar comparisons of different levels of complexity in the vastness of Google. Therefore, we will not pay attention to the general obvious functionality (such as “...saving the history of correspondence or negotiations with clients...”), but look for interesting differences and make our comparison the most accessible for the “simple user”.

Even from the name it is clear that amoCRM is a tool for working with clients in the most direct sense of this expression. All components of the program are aimed at helping the sales department to successfully close the deals. АmoCRM allows the manager to control the work of sales managers and get a detailed analytics on the timing and sales volumes, and managers - to maintain contact with customers and quickly carry out transactions in the funnel. That’s all.

Bitriks24 is a corporate portal, where CRM is represented only as an integral part of the extensive functionality. That is why Bitriks24 optimizes the work of the entire company or enterprise, including with the automation of customer relationships. This is a self-sufficient platform that allows you to organize your business from scratch and create everything you need (website, online store), while amoCRM needs to be integrated with third-party programs and services.

In the future, we will mainly consider the differences between the two systems. Therefore, immediately talk about program placement. AmoCRM is a fully cloud service. To use the product, you need an Internet connection and a gadget: a computer, a tablet or a phone. The same is true with Bitrix24, however it is possible to deploy the on-premise version on its own server. This is a separate topic that provides many of the advantages of Bitrix24 over all other platforms and which you can find out more about in the article (!) of our blog. But then by default we will only compare cloud versions of our “contestants” to give them the same conditions.

As for the location of data centers, amoCRM is hosted in the Russian Federation. The geography of Bitriks24 is more diverse: for countries that legally require hosting local servers for users to their territory, the local data centers are leased, for the rest of the world, they are mainly Amazon’s European data centers.

Main principle of work in CRM

If you are accustomed to follow the chain “Lead” - “Deal” -..., then in amoCRM logic is built a little differently. There are no usual leads here, because for small businesses, for which the system is mostly “sharpened”, this is not necessary. The main work here takes place directly in the “Deals”: you create them, set tasks from deals, connect contacts, assign sales stages and move the deal through the funnel. The truth may be cognitive dissonance, when you look at the address bar of the browser while working with deals (or in a mobile application). In both cases you will see the word “leads”, which, for some reason, is called the entity “Deal”. However, this “pattern gap” passes without consequences for newcomers to CRM).

In Bitrix24, “Lead” is one of the main entities. There are many ways to get leads: from the banal typing with hands to the intricacies of integration from social networks, CRM forms, widgets on the site and many other channels. A separate card is created for each lead, which can be moved according to statuses (their number and names you define yourself) from its appearance in the system to the deal execution. Or reject the lead in case of failure. When closing, the lead can be converted to the essence of “Contact” or “Company”.

The deal in Bitrix24 has been completely dependent on the lead for a long time. But after the update “Sydney” in September 2018, “Fast deals” appeared in CRM: by analogy with amoCRM, you can create a transaction without a lead, if circumstances require.

As for sales funnels, here at Bitrix24 it is only one common. In amoCRM there can be up to 10 of them (and up to 100 sales stages in total).

Many entrepreneurs initially confuse the CRM with a task manager: they want to integrate more in order to distribute tasks to their subordinates and monitor their implementation. For experienced managers, this situation looks the opposite: you need a good CRM with a convenient task book, because without it, the work will not be as effective. Both in Bitrix24 and in amoCRM the task functionality is present, it is possible to display them in the form of lists or a calendar scheduler. And then the differences begin to appear.

AmoCRM is equipped with a small set of standard tasks, such as “Contact customer”, which are quite suitable for the sales department. But only for it.

The tasks and projects in Bitrix24 are so flexible that there is a joke: “While setting up all the parameters of the task in B24, I forgot what it is about”. Of course, in order for the task to work, several parameters are enough, but for perfectionists, there is a place where they will let themselves go.

A screenshot will help to quickly answer this question on ready-made integrations: 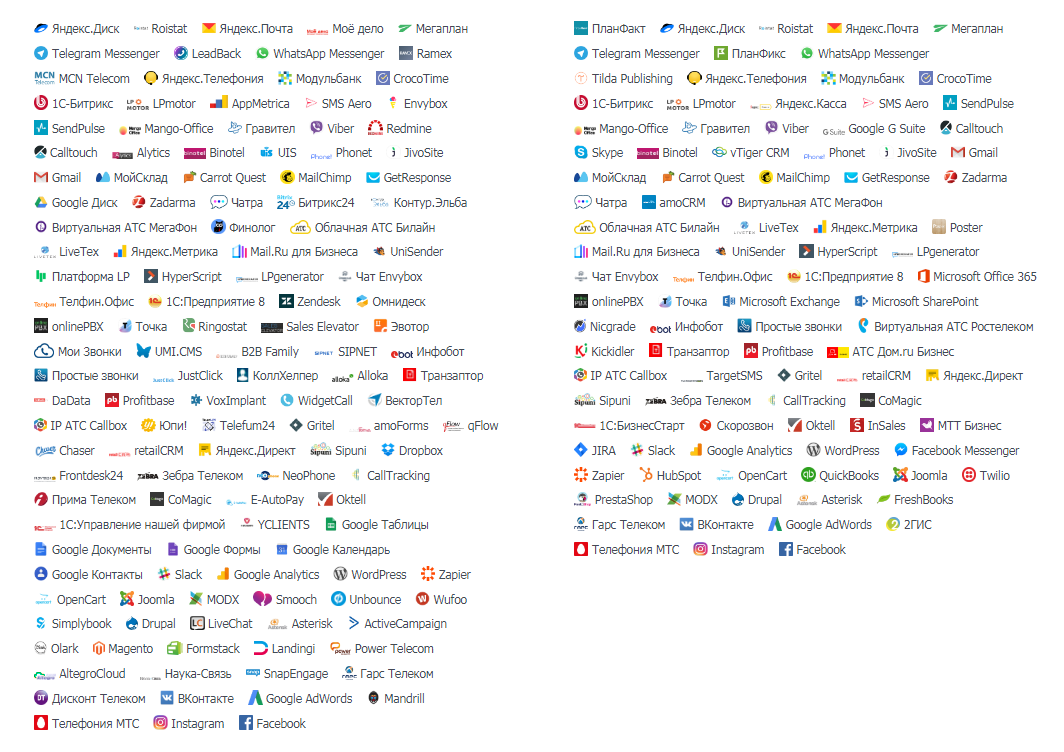 AmoCRM provides an API for additional integrations and widget creation. However, at the moment there are already a lot of integrations that will help your employees to receive “Deals” from the most popular third-party platforms. Bitrix24 is a service with an open API, so you can integrate the system with almost everything. In addition, in Bitrix24.Marketplay laid out daily custom integration, which can and should be used. However, in the integration of Bitrix24, we are not talking only about Internet resources: our company had a case when customers were asked to connect Bitrix24 with ... electronic scales. They succeeded.

The very convenient functionality is built in amoCRM - a calculator to compute the cost of a subscription. Based on your actions and the number of users, the system itself offers you a tariff and calculates its cost. So, for our two employees (manager and sales manager) of a virtual retail company, they ask for $ 307 per year and give 2 bonus months as a gift. It is worth to take notice to a fairly flexible loyalty system with a long subscription.

Regularly for new users there are three tariff plans:

The trial period is 14 days, than you need to give money.

If we say objectively, then the same model of the company that we created in amoCRM, in Bitrix24, would cost us ... but it wouldn't cost anything. We “cosplayed” a small business, for which the “Project” tariff is quite suitable - it is one that is completely free for less than 13 users. Well, if it was commercial, then we would have approached “Project +” for $ 184.25 per year.

It is worth noting that in comparison with other CRM only in Bitrix24 there is an absolutely free and fully functional tariff. For any paid version, a trial of 14 days is also available.

Further, there will be no consulting pathos about the advantages of Bitrix24 in the availability of workflow, communication between employees and the social component, website builder and others. As we wrote at the beginning, amoCRM and Bitrix24 help companies grow and develop, but they operate by different methods and have different approaches to the implementation of CRM tasks. We also do not say anything about the interface, because here opinions are divided. Let's say this: the amoCRM interface is not that simple and logical, as is commonly believed, but the Bitrix24 interface is not that heavy or overloaded. As they say - "Tastes differ."

Thus, amoCRM is great only for the sales department of a small company or in the early stages of development of this department, when additional options for employees are not important. If in the foreground is the simplicity of the functionality and settings, than amoCRM will be the most successful choice. And when the sales department and the company as a whole reach a certain level of development, this system will not be enough. But it's never too late to make friends with Bitrix24.

next article
Similar articles
Save with Bitrix24: luck, specials and cashback

How do you save on business tools and not lose money in the long run? Many entrepreneurs ask themselves this question, especially now, when the world economy is going through some of the hardest times in history. Bitrix24 is a unique product that manages not only to be in the Top-10 of the world, but also continues to be affordable for the widest audience of users. It’s important to be aware of some of its key features to use Bitrix24 to its full capacity. And that’s what this article is about.

Why is it mandatory to automate the creation of commercial offers in Bitrix24?

Bitrix24 generates a number of documents, but the commercial offer is the most important one. Here, everything should go smoothly, well-managed and in a semi-automatic (with the minimum human intervention) mode, so that your clients receive the correct information as soon as possible. In this article, we review the example of the efficient business process with a commercial offer that Avivi professionals created for the METAL PRO BUILDINGS construction company from Toronto, Ontario province, Canada.

Many entrepreneurs know that Zoho is a good CRM system for small and medium businesses with a wide range of opportunities, and they want to try this product for themselves. Well, they're pretty much right, as the developers have implemented many useful features to increase sales, understand marketing and customer support. However, in practice, we are convinced that it’s not easy to use these "benefits", unlike the similar functionality of Bitrix24. But let's put it in order.