Kanban in Bitrix24 is clearly simple and convenient

Many methods have been invented to control the progress of processes, and Kanban, by right, claims to be one of the most convenient. It is widely used in production. which allows not only to monitor the technological process, but also to immediately see problem areas or idle areas. Bitrix24 implements the most effective technologies, which is why konban is also present in the Portal, namely in the CRM and Tasks sections. By using this method correctly, you will always understand what is happening or what needs special attention.

This almost Japanese word is used to refer to the method of visualizing the progress of any process by moving cards along a scale. In the original, it sounds like "KaMban", but an error in the transcription of the Japanese word, which means "bulletin board", gave the world a specific new concept. For the first time on an industrial scale, the method was applied in 1959 on the assembly lines of the "Toyota" plant, and this made it possible to significantly optimize production. Many of us also practice a method without a clue of its name when we re-sticker as we progress through any task.

However, unlike paper slips, electronic kanban has many advantages. Here, nothing will be unglued, nothing will be lost, and with the help of automation, the cards will even move on their own after performing the necessary actions by your employees or reactions from customers. Virtual Kanban is easy to set up and simple to manage.

Because kanban is good for visualizing the overall progress of things depending on the components of the process, this method is excellent for showing the progress of the sales funnel. In CRM, this method is found in Leads and Deals. In order to see the kanban, you need to select this type of display instead of the list or calendar in the corresponding section.

Essentially, the kanban in Leads and Deals is a horizontal layout of your sales funnel structure. The columns from her stages are displayed here with the names you assigned. By default, in Bitrix24 there is already a preparation of stages, and in industry CRM, developers or Partners have already provided everything necessary. Each column has its own color, which is common to all the Lead cards in it, that is, it is impossible to mix something up. When you drag a card into the adjacent column, the color changes automatically. Let's consider a concrete example.

As you can see, each stage corresponds to a stage column in the kanban. The length of the electronic kanban board depends on the "depth" of the funnel, navigation buttons are used for scrolling in the portal. Lead cards are compiled as they are received, viewing or editing is possible right there in the open slider window.

In addition to monitoring the progress stage in this mode, we immediately receive additional important information. In this case, it can be seen that at the stage of distribution of responsible cards (1) there are no cards at all, and at the stage of sending a commercial offer (2) three Leads "hung up" at once. This is a normal working situation, but if the situation does not change for a long time, or the cards continue to accumulate in a specific place, this is a signal of increased attention to the manager.

We observe a similar situation for Agreements in Bitrix24. This is where deals end up after funneling leads, or quick deals can be created without the involvement of potential buyers. The principle of operation of the method remains unchanged: you advance the deal card according to the previously created stages.

However, in Bitrix24 there are several directions of transactions at once, and for each of them the kanban will have a different appearance.

Kanban setup for Leads and Deals

The Bitrix24 Portal administrator and employees with the necessary access rights can edit many kanban parameters:

It should be noted that the use of robots and triggers significantly improves the work of employees. This is more about automation than kanban, but you should always be prepared that the card can "jump" to the next column by itself, if the necessary actions have been taken for this: the approval of the manager has been received, the email has arrived from the customer, etc.

It is also necessary to understand that if the card does not move to the desired stage with the user's mouse, this is not a problem with Bitrix24 - if all the necessary conditions are not met at the previous stage, it will not move to the next (or through one) card in any case.

Sorting and searching for the necessary information in the kanban mode is also very convenient. You have a dialog where you can set and combine many search parameters and the kanban will show you the results with a layout of the stages in which the card is at the moment. 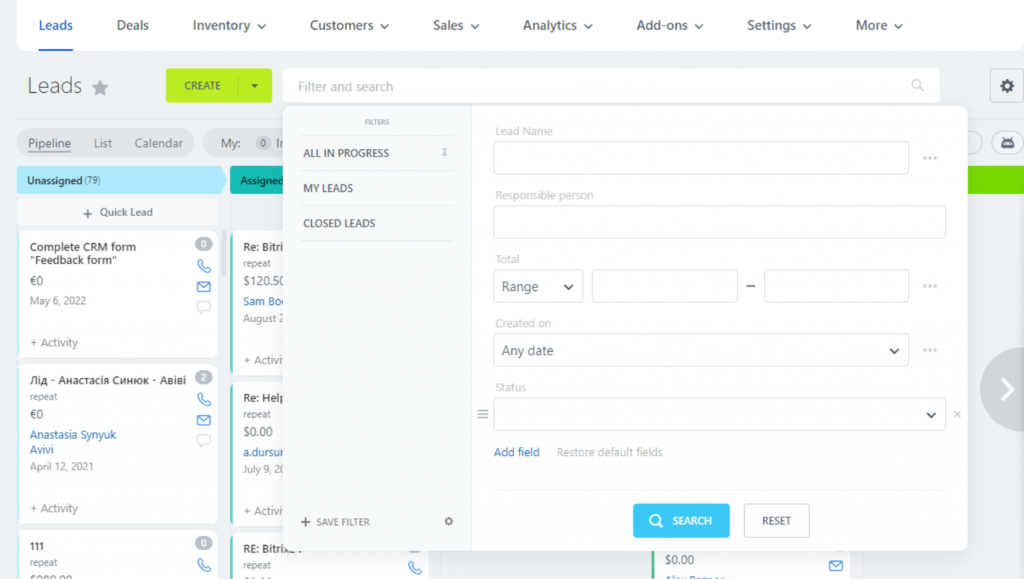 The kanban method is also excellent for monitoring the execution of tasks according to certain statuses (it is better to use Gantt for time control). The prerequisites for implementing this method in the Tasks and Projects management section existed a long time ago, but only since March 2020 has the tool been put into practical use.

You can simply see the kanban in the "Tasks" subsection after selecting the "Terms" and "My Plan" views. In the "Projects" section, the Kanban method is available along with other views when displaying tasks: list, plan, Gantt and calendar. How not to get confused:

View "Deadlines" in Tasks and Projects

Shows you a kanban board with tasks broken down by time segments. In the first place with red color by default, you will see all overdue tasks. It is desirable, of course, that this column always remains empty, but there are different cases. Next are the stages "For today", "This week", "Next week" and "Without deadlines". In this kanban, you cannot delete or close tasks by dragging and dropping - the whiteboard is only needed to monitor estimated due dates. It should also be noted that the scale of advancement here is directed in the opposite direction — from an indefinite time on the right to today and, as it were, "yesterday" on the left.

View "My plan" in the task

Customizable electronic whiteboard required for surface layout. Here you can quickly "outline" tasks in advance according to a scheme convenient for you. Since the length of the kanban is not limited, you can build a planning logic that you understand and follow it.

This board is displayed in the top menu in Tasks and is a variant of the display of tasks in Projects. Kanban shows tasks as they progress by status and is necessarily tied to a specific project or group. If you create a task outside the project, the "Stage" indicator will not be there at all. By default, for tasks from groups or projects, three standard stages are immediately available: "New", "In Progress" and "Done", and the task is created immediately at the first of them. But you can edit the stages for each project separately and the stage indicator will change accordingly: how many stages, so many divisions can be noted.

Since each project has its own kanban, you will have to switch between all available projects. It should also be noted that moving the task to the last (rightmost) stage of the kanban does not mean its completion! This is important to remember, because there were cases when users simply changed the stage to the final stage after completing the tasks, and then the counter of tasks with a past deadline skyrocketed.

Kanban in Projects is also endowed with its own memory: the system remembers which tasks you entered last and shows them to you when you enter a project or group.

Not a step back!

As you can see, kanban is really a simple, convenient and informative method of visualizing the progress of various tasks. If you make the settings for yourself and your business - correctly distribute the stages, display only the necessary fields in the card, choose colors that are pleasing to the eye — then using kanban in Bitrix24 will be a real pleasure for you.

We also want to dispel the myth that cards can only be pushed forward. In fact, there are no restrictions and you can almost always return a lead, deal or task to a previous stage if necessary. It's just that often such an opportunity is blocked or a bureaucratic procedure is added, such as leaving a comment-explanation or getting approval from a senior manager. Our employees are always ready to answer any of your questions about setting up and using this method in Bitrix24. Use the tools of the system and, as they say: "Let everything go smoothly for you, like a kanban!"

next article
Similar articles
How to transfer the data?

When you decide to change the CRM system or integrate a new one with a ready-made platform (website, online store, payment system, etc.), you will inevitably encounter the need to transfer data. The belief about the inevitable loss of information stops many of us. Do not be afraid: uploading, downloading or migration is not as scary as it may seem at first look. But they are important.

Sometimes, we are not up to date with everything related to our work. But it’s never too late to learn. Especially with CRM marketing: you can read about the latest things, nuances of work with the tools, and daily problems in our review!

Is it possible to be a successful producer and a seller of goods or services at the same time? Skeptics will say that it is not easy. And those who constantly want to develop their business, will just read this article.